Great Neck’s five Scholars are among 300 semifinalists nationwide, who were selected from an applicant pool of 1,805 students. Each Scholar will each receive $2,000, with a matching amount for their schools.

The Regeneron competition is the former Westinghouse and then the Intel Science Talent Search. The Talent Search, begun in 1942, is the nations’ oldest, and often considered its most prestigious, science and mathematics competition for high school seniors. It is owned and produced by Society for Science. On Jan. 20, 40 of the top 300 Scholars will be announced as Finalists and will advance in the national competition.

Forty-one students from grades 6, 7, and 8 competed in North Middle School’s annual spelling bee on Jan. 11. Contestants earned a spot in the school-wide event by winning their respective classroom-level spelling bee in December.

After ten challenging rounds, eighth-grader Lindsay Engelstein was declared the winner followed by eighth-grader Ofer Adar as runner-up. Both students will advance to the next stage of the competition and test their skills against other middle school spelling bee winners on Long Island.

GNPS/TV programs are available on-demand, 24/7, on the school district website, www.greatneck.k12.ny.us/tv. Programs can also be viewed in the incorporated villages of Great Neck on Optimum Channel 75 and on Verizon Fios Channel 32. Airing times in program descriptions below are for Optimum and Verizon viewing.

The North High School Fine and Performing Arts Department presented their Winter Concert over two evenings in December. Tune in to GNPS/TV to view the Instrumental Night from Dec. 20, featuring performances by the Chamber Music Society, Concert Band, Symphonic Band, Concert Orchestra, and Symphony Orchestra, all under the direction of Joseph Rutkowski, instrumental music teacher.

GNPS/TV programming reflects the offerings of the Great Neck Public Schools and the achievements of its students and staff. Programs are student-produced. For more information, contact Robert Zahn, director of educational television and broadcast media, at [email protected].

The sole purpose of this award is to recognize GNPS educators who have had a profound impact on the lives of students. Alumni from North High School, South High School, and Village School may nominate an elementary teacher, a secondary school teacher, a guidance counselor, or a social worker for this award.

Nominations detailing how the selected teacher has had an impact on the individual’s life must be submitted to [email protected] by Jan. 31. Authors should identify themselves only by their student number, which may be obtained from the guidance office at the high school they attended (or for Village School graduates, the middle school attended). Please also include the name of the high school attended and the year of graduation.

A five-member award committee will carefully consider all nominations and select two recipients based on the perceived impact that the teachers had on their students’ lives.

For additional information about this award, including the nomination and selection process, contact Dr. Stephen C. Lando, Assistant Superintendent for Secondary Education, at [email protected] 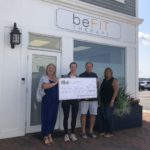