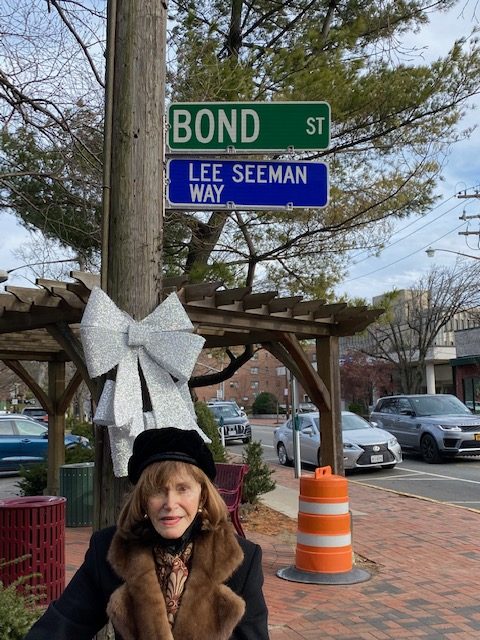 On Wednesday, December 15 the Great Neck Plaza Village Board voted to approve a resolution to place an honorary designation on a portion of Bond Street in Great Neck that will be known as “Lee Seeman Way,” in honor of Town of North Hempstead Council Member Lee Seeman who is retiring at the end of this year.

The Village of Great Neck Plaza, led by Mayor Ted Rosen, will host an official renaming ceremony on Sunday, December 19 at 12 p.m., when the portion of Bond Street between Grace Avenue and Maple Drive will have the posts changed to “Lee Seeman Way.”

Council Member Seeman has had a prolific career in government and politics, and has maintained a passion for and commitment to civic engagement both in and out of office. Council Member Seeman is currently serving her fourth term on the North Hempstead Town Board, after first being elected on November 8, 2005.

Council Member Seeman has always been an active member of the community. She has been the program director of the Great Neck Chamber of Commerce since 1975. She has promoted topics such as environmental conservation, health care, small business concerns, the economy of Long Island and computer science. She has brought guest speakers from all over the world including the Consul General of Cyprus and the Ambassador of Belize. Presently, she is also a member of the COVID-19 Town of North Hempstead Business Response Recovery Workgroup.

Other notable achievements include being appointed by both President Bill Clinton and President George W. Bush as a member of the United States Commission for the Preservation of America’s Heritage Abroad since 1995. She has also been a trustee of the W.F. Albright Institute for Archaeological Research in Jerusalem since 1988.

In addition, Council Member Seeman is a member of such community groups as a 55-year member of the League of Women Voters, the World Jewish Congress, Hadassah, a lifetime member of the National Association for the Advancement of Colored People (NAACP), and the Sierra Club and is an active member of Temple Beth El of Great Neck

No posts to display

ABOUT US
Blue Ribbon is the publisher of 6 award-winning weekly newspapers on the North Shore of Nassau County, Long Island, and its website The Island Now. The newspapers and the website are the No. 1 source of news and information in the communities they cover. Blue Ribbon has partnered with the five weekly newspapers operated by Litmor Publications to allow advertisers to easily reach 11 newspapers with a combined circulation of 39,782 and a readership of 119,346 as well as two websites. The 11 newspapers in the Blue Ribbon Media-Litmor Publications Advertising Group provide cost-effective target marketing of northern and central Nassau County.
FOLLOW US
© https://theislandnow.com | Contact Us: 22 Planting Field Road, Roslyn Heights 11577 | Phone: 516-307-1045 | Fax: 516-307-1046